Spiffing y'all up, one typo at a time

Hey, y’all! If you’ve spent any amount of time in the South or read anything by a Southern writer, you already know how much we Southerners love our colorful comparative sayings. You know, the metaphorical illustrations of how hot it is outside, how hard it’s raining, how unintelligent your neighbor is . . . those sorts of things.

For example, last week I was busier than a one-armed paperhanger. When I go eat Tex-Mex, I almost invariably end my meal saying that I’m fuller than a tick on a big dog’s belly. And I can’t tell you how often I say that someone is dumber than a stump. (Bless his/her heart.)

But, even in the South, we know that some things simply cannot be compared—because they are absolutes. There are no degrees of them; you can’t be or have more or less of them. Heat can be compared. There’s hot at 90°, hotter at 97°, and hotter than Hades at 107°. But dead can’t be compared. Even though we might say that the phone is deader than a doornail, it’s not. Dead is dead. You can’t be more dead or less dead than someone else. Same goes with pregnant. You either are or you are not. In the maternity ward, one gal isn’t more pregnant than another. One may be further along, but not more or less so.

This same idea applies to one of my favorite punctuation marks: ellipses. You know, those THREE little dots surrounded by spaces that indicate:

I use ellipses a whole lot. Ellipses and em dashes are my favorite punctuation marks. They don’t call me The Grammar Belle for nothin’.

Ellipses can add “color” to your writing, intrigue to your Facebook posts, and character to your tweets. I advise that you take them for a test-run! Please, PLEASE remember the most important thing about ellipses: They are made up of THREE and ONLY THREE periods, no more and no fewer. THREE, y’all. Using four or five or eight or eighteen doesn’t make you “more elliptical” because—just like being dead or pregnant—there are not degrees of ellipticality. You are simply using ellipses or you’re not.

I don’t care if you’re feeling REALLY, REALLY quizzical. Your line of umpteen dots all in a row just makes it seem like you nodded off/passed out at your computer with your finger on the period key. It doesn’t serve to add drama and intrigue to your writing. It just makes me question your schooling, and nobody needs TGB being more of a judgmental b**** than I am already wont to. Do it for my reputation, y’all.

Did you know that cats asleep on a keyboard are a thing? Google “asleep on keyboard.” You’ll get as many cat images as human ones. (Image courtesy of technobuffalo.com.)

There IS a time, however, when four periods (WITH SPACES BETWEEN THEM—don’t forget that part) are 100% correct. That’s when you’re using them at the end of a sentence! (Although Microsoft Word “grammar check” will say otherwise.) Put your ellipses where the missing words or trailing thought is, and then add in whatever punctuation you might have normally used for the original sentence. 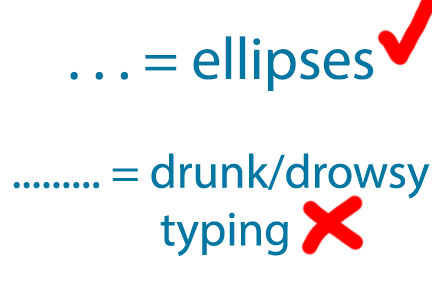 11 comments on “A Very Pregnant Pause”

The Latest From TGB